Focus Group: The Impact of Pictures of Aborted Babies

From Priests for Life: 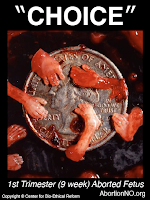 In April of two thousand and ten, Priests for Life asked The Polling Company to conduct professional research into the attitudes of the African American community about abortion, and into what kind of messaging would be most effective for them. Focus groups were held in major cities and a nationwide poll was also conducted.

One of the things that was done in the focus groups is that pictures of aborted babies were shown to the participants. This had an impact, expressed by these words of one of the participants, “Before I came in to this room today, I was pro-choice. But after seeing those pictures and hearing all that, I think I’ve changed my ideas on abortion.”

Let’s keep in mind the simple truth that the more people see abortion, the more they reject it.