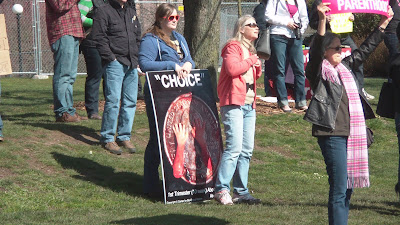 Prominent columnist and pro-life blogger Jill Stanek linked to our event last weekend in Seattle, which, with her wide readership, generated over a hundred comments, and led to a subsequent headline on LifeSiteNews.com.

Here is one exchange buried in the comment section of Jill Stanek’s blog.

“Were any of you even at the rally?” -JB

I held the camera.

“Planned Parenthood’s primary service is NOT abortion, it is prevention.” -JB

Arguing over what their “primary” service is is irrelevant. PP is directly responsible for the deaths of more than a quarter million American babies every year. I am not in the habit of weighing any perceived good someone does against the lives of babies he ends. You cannot shelf the baby killing and engage in rational discussion of positive attributes of PP any more than we could shelf the Jew killing and discuss positive attributes of Hitler. (If Godwin is a sticking point for you, just replace Hitler with Pol Pot.)

“The rally wasn’t for abortions, it was for Planned Parenthood.” -JB

Again, you’re trying to divorce Planned Parenthood from baby killing, and so long as they remain the nation’s largest abortion provider, that just isn’t possible. Imagine if I attended a rally in support of federal funding for the Ku Klux Klan, and you showed up with pictures of blacks being lynched. What would you think if I posted that the rally wasn’t for lynching blacks, it was for the KKK?

“As far as the pro-life protesters who showed up, they should have read what the rally was actually for. We were not looking for a debate between pro-life and pro-choice; we were standing with Planned Parenthood.” -JB

No, you are right. PP is never looking for a debate with us. We deliberately force the debate on them whenever and wherever we can. By confronting PP with pictures of their handiwork – the horrifying and undeniable proof that abortion kills a baby – we force them to defend their raison d’etre without recourse to twisted, ambiguous and misleading language (‘choice’, ‘clumps of cells’, ’reproductive rights’, etc).