From the Kitsap Sun: 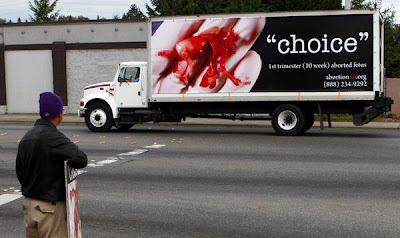 Rob Rudnick would rather be flipped off than ignored.

Driving a box truck with graphic, billboard-sized pictures of aborted human fetuses on it, he gets a lot of both.

Rudnick, of Bend, Ore., was cruising Wheaton Way, Warren Avenue and Highway 303 on Monday afternoon as part of the Center for Bio-Ethical Reform’s Reproductive “Choice” Campaign.

Rudnick, 55, said he would prefer a negative reaction than none at all.

“So far today I’m not seeing as many thumbs up,” he said from the driver’s seat. “It’s usually very polarized. Either I’m getting a thumbs up or the bird, but mostly I get indifference, which is the least healthy of all responses.”

Local groups have long demonstrated against abortion, often carrying signs with pictures like those splashed on the truck. But they’ve never had a vehicle like this to elevate the issue.

“The tendency is to have an emotional reaction and blame the person holding the picture,” he said. “We understand that, because it does evoke strong emotions, but the intent is to educate people about what goes on inside abortion facilities. We believe that once that is known and clearly understood and people witness these horrifying photographs, that the killing will stop.”

Stockton invited friend Darius Hardwick, Northwest operations director for Center for Bio-Ethical Reform, to bring the truck to Bremerton. It will tour here again this afternoon.

Michael Ferman, standing at Warren Avenue and 16th Street with the same pictures that are on the truck, watched it drive past a few times.

“It shows the truth,” he said. “When people say, ‘I’m pro-choice,’ this is what it means by ‘choice.’”
Ferman, 31, says he’s gotten several death threats and had his signs stolen and damaged. While he was there Monday, a man rolled down his window and flipped Ferman off. Another yelled, “Someone should have (bleeping) aborted you, you (bleeping) piece of (bleep).”

But he’s also had people tell him that they decided not to have an abortion because of the images.

“We’re here to help, and that’s the important thing,” he said.

David King of East Bremerton hates to drive his day-care van full of little kids past the signs and a little coffin that’s sometimes displayed.

“I understand they’re against abortion. That’s cool and all,” he said. “But they can go about it in another way. I wish they’d have a little respect for the kids who are here. There are different ways you can express your views. You can do things more positive than hold up pictures of dead babies.”
Stockton started the Samuel’s Hand Coalition a couple months ago. Besides stopping abortion, it seeks to improve the alternatives.

“We understand there are neglected and unwanted children born every day,” he said. “We want to work on the foster care and adoption systems in this area in order to not be simply moving the pain and death from one side of the womb to the other.”