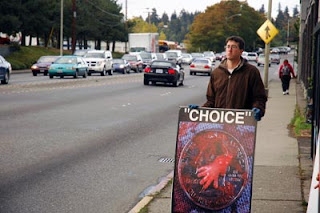 (Bremerton, WA) Following a decision made this summer by the Olympic College Board of Trustees, the state college plans to revise its free speech policies, relegating non-students who wish to exercise their First Amendment rights to an obscure location described by the school paper as the “least visible on campus” (“OC Adopts New Regulations,” The Olympian, 9/21/2010).

The board’s decision comes after a member of the Anti-Choice Project (www.antichoiceproject.com) — a non-profit organization based in Bremerton, Washington, which uses pictures of abortion to reveal the humanity of the unborn child and the inhumanity of abortion — peacefully protested on campus with 3’x4’ hand-held signs during the 2009 and 2010 academic school years.

The Anti-Choice Project rejects out of hand the decision made by the administration of Olympic College that free speech can be limited to an obscure and nearly-invisible area of campus. Under the new policy, students would still enjoy their First Amendment rights in all free speech areas, but non-students would be restricted to the administration’s carefully selected locations.

Tom Herring, Co-Founder of the Anti-Choice Project said, “What this administration is attempting to do borders on the comical as a ‘free speech area’ denied to non-students is by definition a restricted-speech area. Not as comical are the fines which accompany such discriminatory policies infringing on citizens’ First Amendment rights.”

As Olympic College receives funding from the taxpayers of Washington State, its campus is public property. Property in which, Herring explains, the rights of citizens — members of the Anti-Choice Project included — cannot be denied as a result of content-based discrimination.

Anti-Choice Project Co-Founder, Andrew St.Hilaire said, “The new policy is being driven by board members like Ms. Ross who feel ‘put off by people’ and ‘their point of view’ which Ms. Ross thinks is too ‘pushy.’ [C.f., Ruth Ross, Olympic College Board of Trustees member and Dean of Library and Media Services quoted in the article “OC Adopts New Regulations,” The Olympian, 9/21/2010.] It is axiomatic, however, that the First Amendment is especially protective of speech which is ‘off-putting,’ ‘pushy,’ and offensive.”

Herring concluded by saying, “Oppressors always try to suppress the pictures, but it is truly frightening to contemplate the lengths to which this administration is willing to go in its attempt to hide the truth of abortion from public view. If — as current U.S. law dictates — abortion is a perfectly moral choice, why does Olympic College find pictures of it to be so offensive?”

The Anti-Choice Project has sought legal counsel at this time.

(Photo: Co-Founder of the Anti-Choice Project, Tom Herring, holding a sign of a 10 week abortion during a demonstration outside the Olympic College campus)

Correction: According to the Olympic College newspaper, the Olympian, Ruth Ross is the Dean of Library and Media Services and was on the 12-member panel which developed the language and content of the new free speech policy adopted by the college Board of Trustees. She is not a member of the Board of Trustees. The Anti-Choice Project apologizes for this factual error.