Video: Man Lashes Out on Anti-Choice Project Signs and Camera 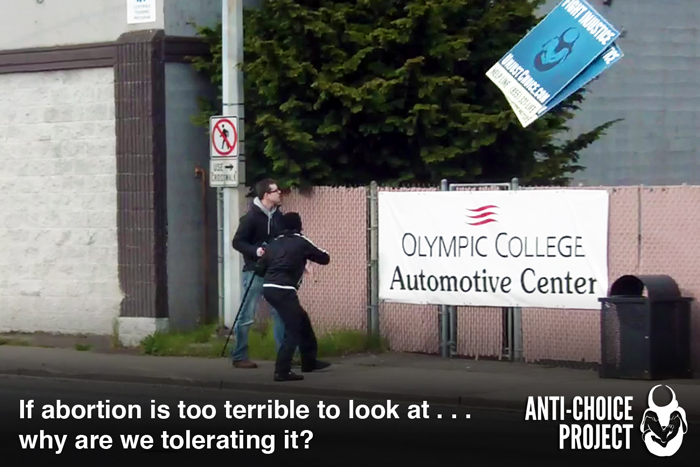 Kenrick Bradley approached Anti-Choice Project co-founder, Andrew St.Hilaire, during a protest in front of Olympic College in Bremerton, Washington, on May 2, 2012, and began cursing us for showing what happens to 68 babies every single day in Washington State, and 3,500 babies nation-wide.

Mr. Bradley grabbed our abortion-photo signs and threw them over a fence. He then tried to steal our video camera, presumably to destroy the evidence of his behavior.

Like many Americans, Mr. Bradley finds the sight of abortion intolerable. But this only raises the question: If abortion is too terrible to look at, why are we tolerating it? The Anti-Choice Project knows that injustices which are covered up have no hope of ending. Horrifying pictures always offend but historically, they are the key to social reform. As abolitionist William Wilberforce said, “You may choose to look away, but you can never again say that you did not know.” On May 23, 2012, Kenrick Bradley pled guilty to charges of Malicious Mischief. He was ordered to pay $388 for damages to our signs and camera equipment as well as court fees.