Warning: Explicit and vulgar language contained in this post.

Speaking in reference to my audibly-shaky voice when responding to Chad Smalley (who has been charged by the Poulsbo Police Department with a misdemeanor for inciting a fight in this video), YouTube user kiastar67 writes:

“He was a PUSSY and afraid.﻿ Stop lying. You fucktards are sad and OBVIOUSLY lying. He was saying he was sorry for showing the kid as you can tell in his inflection and tone. You instigate BS and get scared when someone gives it back.You people are sad and small and do it because you THRIVE on drama. I would have done worse,.You lucked out that he didn’t curb stomp your ass.TAKE YOU LUMPS AS YOU DESERVE THEM AND STOP HIDING BEHIND A SIGN,”

I write in reply:

“He was a PUSSY and afraid.”…”You people…do it because you THRIVE on drama.”

I’m confused. Are we scared of the drama that follows our protests or are we protesting because we thrive on the drama?

For the record, by the time Mr. Smalley’s spittle was hitting my face I had made up my mind not to fight back. Yes, my nerves were shot; guilty as charged. But I was not apologizing to appease Chad or to ask forgiveness for showing the picture to his son.

We put our own well-being at risk, not because we “thrive on drama”, but because we care more about the millions of babies being destroyed by abortion than we care about what people think, or do, to us. We believe that there are some causes bigger than ourselves. We think that baby killing is the single greatest injustice in the history of man.

We don’t hide behind our signs, kiastar67. We stand behind them in full view – and arms reach – of violent men like Mr. Smalley. Yes, we are willing to take our “lumps” for it. Yes, I was lucky he didn’t “curb stomp” me. And who would have been surprised by it?

“I would have done worse,.You lucked out that he didn’t curb stomp your ass.”

I, for one, am not the least surprised that someone who supports violence against unborn people, would be willing to act violently toward born people. Fortunately this is still a land of laws, not the lawless anarchy of angry citizens curb stomping those whose messages they don’t want to see. 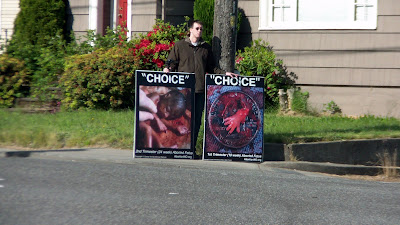