This Sunday, Tom and myself, along with family members, friends, and hundreds united in the fight against the Culture of Death, were privileged to hear Fr. Frank Pavone speak at the It’s All About Life Conference in Seattle. Fr. Pavone founded Priests for Life in 1993, one of the leading pro-life organizations in the United States. Priests for Life has partnered with Rachel’s Vineyard, the largest post-abortion healing ministry in the world, and Silent No More Awareness, a campaign which includes a coalition of women and men who speak out about their regret to abort their children. Fr. Pavone is decidedly one of the most dynamic and influential leaders in the Pro-Life Movement; a man who has dedicated his life to defending the most vulnerable in our society. 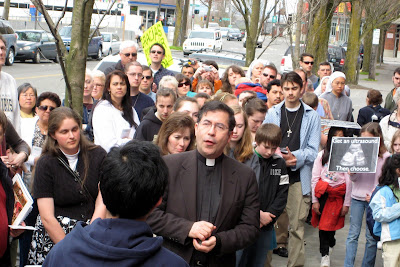 Fr. Pavone speaking to a crowd of about 150 outside Planned Parenthood in Seattle
Fr. Pavone gave an outstanding talk which presented the way forward for the Pro-Life Movement, in part by highlighting the many ways in which we are winning this fight in America, in spite of the recent set backs which have come from President Obama’s pro-abortion agenda. Among many powerful statements, the following struck me:
Public servants who can’t tell the difference between serving the public and killing the public do not belong in public office.
Discussing the ACP with Fr. Pavone 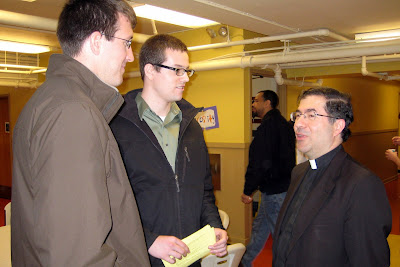 Tom & Andrew with Fr. Pavone
Before his talk, Tom and I had the opportunity to tell him about The Anti-Choice Project. I told him it was, in part, his strong defense of using the graphic images and his statement that “America will not reject abortion until America sees abortion” which inspired us to start the ACP. Fr. has written extensively about the necessity for the Pro-Life Movement to expose the truth of abortion through the use of graphic images. To our surprise, Fr. said he had heard of our group and seemed thrilled about the work we are doing. We spoke to him about our aspirations to see this effort spread to cities throughout the nation — that is, pro-lifers across America taking the truth of abortion to the streets with such frequency enough to stir the conscience of society. He was very supportive of this idea and offered to have us on his radio program.
We hope to have the opportunity to be on Fr. Pavone’s radio program and to work with Priests for Life in the future as we pray The Anti-Choice Project will not only hasten the end to abortion here in Kitsap County, but across America as well. 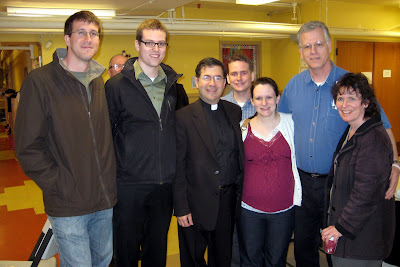